Has the universe always existed?

Or did it have a beginning?

Has the universe always existed? Or did it have a beginning?

According to the biblical story, the universe has not always existed because it began when God created it (Genesis 1:1).

That’s why clothing stores exist to continually replace our clothes. The Bible uses this as a picture to help us understand that the universe will not last forever but will wear out. Psalm 102:25–27 says, “… the heavens are the work of your hands. They will perish, but you remain; they will all wear out like a garment. Like clothing you will change them and they will be discarded. But you remain the same, and your years will never end.”
Things that wear out cannot, of course, be eternal. The Bible’s perspective is that the universe is wearing out and so the universe cannot be eternal. If it is not eternal, it must have had a beginning.

But what about science? Does it support the Bible’s perspective?

Figure 1. Graph of the universe’s energy.2

Where does this leave us?
Given that the amount of usable energy is decreasing, the universe cannot be eternal. It must have had a beginning. This is one reason why Alexander Vilenkin, physicist at Tufts University, commented, “All the evidence we have says the universe had a beginning”.3 This quote from Vilenkin is very significant because it was presented at Stephen Hawking’s 70th birthday party. Someone called these evidences for a beginning “the worst birthday presents ever”4 because Hawking (an atheist) doesn’t want to believe the universe had a beginning. But why doesn’t he want to believe this? Because, “If you have an instant of creation, don’t you need a creator?”5 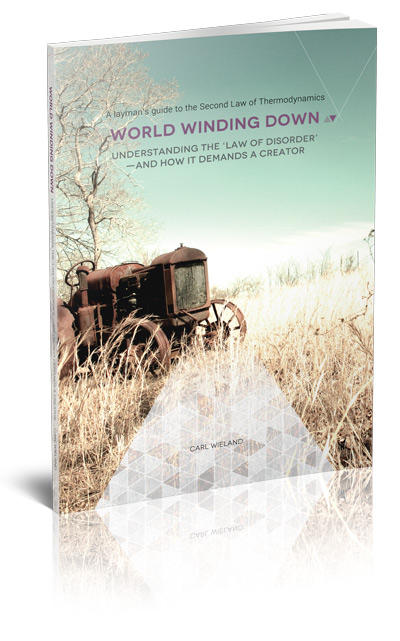 We know that the universe had a beginning (see Q 1 above). But is it possible that the universe could have spontaneously come into existence all by itself? There is good reason to think that this idea is impossible.

Here is why this Law is relevant to our discussion: the idea that the universe came into existence (an effect) all by itself (without a cause) contradicts this most fundamental idea. This can be presented in the following way:1

If the universe had just erupted and spontaneously brought itself into existence, this would mean that nothing had suddenly become something—an entire universe in fact! But this could never have happened because…

The truth is that something that doesn’t exist cannot do anything at all—much less create itself! And if that’s the case, then the universe couldn’t have spontaneously come from nothing and couldn’t have caused itself to exist.

Perhaps we have heard someone ask the question, “If God is the Creator of the universe, then who created God?” Or perhaps we have even asked that question ourselves.

As we discovered in module 3—the beginning, the Bible presents God as the uncreated Creator of the universe. He is “the eternal God” (Deuteronomy 33:27). Isaiah 57:15 says that God is forever. He has no beginning and he has no end—“For this is what the high and exalted One says—he who lives forever, whose name is holy”. God has always been the eternal God; therefore, no one made God.

If everything that had a beginning needs a cause (see Q 2 above), then God doesn’t need a cause, because he is eternal. We can see this by the following:1

What this means is that the question, Who made God? is actually the wrong question to ask, because God, by definition, has no beginning. To ask, Who made God? is like asking, Who is that bachelor married to? Both are misstated questions.

Sometimes we can struggle to understand the idea that God is eternal. But since something cannot come from nothing (see Q 2 above), and since something is here (e.g. the universe), there must have been something/someone that was eternal. When we ‘boil it down’, we have only two options:

What do you think?

Is it possible to be a Christian and believe in evolution?

Yes, it is possible to be a Christian and believe in evolution. Some Christians believe that God used the evolutionary process to bring the universe and all life into existence. To be a Christian is to be rightly related to Christ—not to creation (John 1:11–13; 3:16; 8:24; 14:6).

The relationship between the biblical story and evolution can be a tricky topic for many people and can be one that requires exploration in greater depth. The following information is designed to help you begin this exploration.

The biblical story and evolution:

While it is very possible to be a Christian and accept evolution, there are some difficulties in trying to fit evolution with the biblical story. Here are just three of these problems:

Are there alternatives to the evolution story?

For many of us, evolution was a topic we learned in school without any alternative. But an increasing number of scientists now question the validity of evolution, some of whom are Christians, while others are not.

Why is it that scientists who are equally trained, with PhDs in their respective fields, can disagree so much on this topic? It might be surprising for us to hear, but the reason is that both scientists who accept evolution and those who don’t have the same evidence—it’s just that the worldview that each scientist has is different, and so each scientist interprets the evidence differently, based upon their worldview. Perhaps a simple example may help explain this.

But, it might surprise us that this is not the only explanation. Another explanation is that the Creator God used the same information-processing system (DNA) when he designed all the basic types of living things. An analogy is that an architect will often use similar design principles when designing different buildings, or an automotive engineer will design and use similar (or even identical) parts across different models of cars. This is why all living things today have DNA: they were designed by a common designer.

So, here we have the same evidence (all living things have DNA) that can fit two alternative explanations: common ancestry (evolution) or common design (creation).

For further reading and viewing:

Nine PhD scientists (the book) and 15 PhD scientists (documentary film) in their respective science fields explain why they think the evidence best fits the creation explanation. The book and film will let you explore:

How do I become aware of God?

There are at least two ways in which we can become aware of God. The first is through God’s created world; the second is through the Bible.

We will explore two ways in which we can become aware of God:

Through the Bible. The Bible claims that within its pages, God has told us what he wants us to know about himself! And—even more—it tells us how to come to ‘know’ him (not just know ‘about’ him). It’s an amazing and beautiful claim—and one that we’ll continue to explore during the Long Story Short course. There’s no greater way of becoming aware of God than through the Bible.

What about the Trinity?

Christians use the word ‘Trinity’ or ‘tri-unity’ to explain how God can be one and three. Christians describe God as one ‘being’, who exists in three ‘persons’. But what does this mean?

Is creation part of God?

The idea that creation (or the universe) is a part of God is called ‘pantheism’. This idea is found in many of the world’s religions such as Hinduism, Buddhism, Bahá’í and Scientology. And many other people who don’t identify with any of these religions embrace this idea.

But there seems to be a big problem with this idea—the universe is not eternal.

Is there any scientific proof that God exists?

Ultimately, there is no absolute scientific proof either for or against God’s existence but Christians believe there is very good evidence for the existence of God.

While we cannot absolutely prove God’s existence, Christians believe that the available evidence is thoroughly consistent with and strongly supports the Bible’s opening line—“In the beginning, God…”

Why can’t I see God?

We cannot see God because he is spirit, not matter.

Is God male or female?